Just read an article about something called Project 365, on a website called Photojojo, which seems to be an online photography newsletter you can subscribe to. Project 365 was originated by photographer Taylor McKnight, who started taking a photo a day on January 1st, 2004. When he took the first photo:

"he never imagined the project would not only serve as a way to remember a year, but also help him understand what was important to him in his life.

Whether it was his relationships, his career, or his fashion sense, recording a photo a day for a whole year left him with a rich visual history of his life. And it made him a better photographer to boot!"

Interesting idea. Well, I doubt that I could keep up the photo-a-day pace. But I did take some photos yesterday that pretty much represent how I spent most of the day. We're in the process of reorganizing the space in our bedroom – trying to clear out a lot of the junk that's gotten lost in there over the last decade or so. Throwing lots of stuff out – including a bunch of very old floppy disks. Computer technology has advanced many generations since we started out with our old IBM. We really can't get at the data on these anymore, so into a garbage bag they went, and I snapped my Photo of the Day, below. 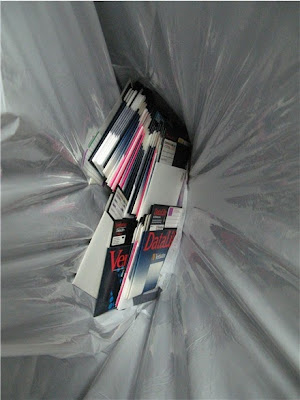