Hmmmm. I have nothing to say. I know I said I was going to experiment with posting here everyday this week, but I really can't think of anything of interest at the moment.

It's been cold and rainy here today – the kind of weather I hate. But at least it's been relatively quiet. Our condo building has been having a lot of maintenance work done (facade upkeep) this year. It involves a lot of scraping and drilling and banging and brick replacement. And sometimes the noise can be deafening. And the dust is like an evil entity.

And generally, rain doesn't even slow the workers down. But today must have been especially bad because there doesn't seem to be a lot of activity out there.

We've had to tape all our windows shut and have them covered with plastic, to keep the brick dust out. So this is the view we've had out our bedroom window for the last few weeks. Lovely, isn't it? 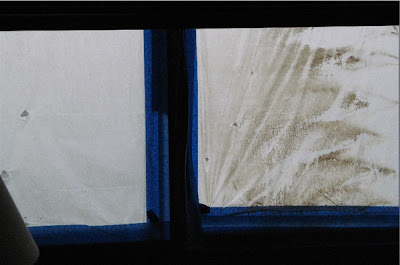 And the second photo is a shot of my hubby clearing out books from a corner of his study last week. We had to have the building inspectors come in and make sure there were no leaks in the work they've done so far. I'm happy to report there were no leaks, but the inspection (which took about half a minute) meant that M. had to spend a whole afternoon, moving books and bookcases away from the wall, and then another evening moving everything back. It was a lot of work, but at least it gave him a chance to play with his books. 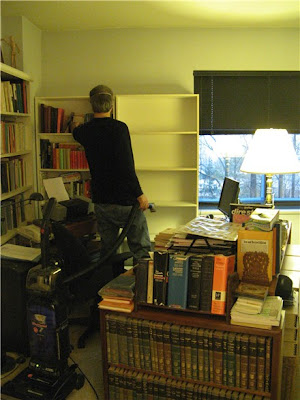