Random Photo Monday: Another Christmas Past

Pardon the shameless nostalgia, and the faded condition of the photo. It was Christmas Eve. I was four years old. The pajama doll was a gift, as I recall, from one of my aunts. I'm dressed in the matching sleepwear. Looks like pajamas but it could have been a nightie – don't really remember which. Those dolls were very popular in the 1950s. 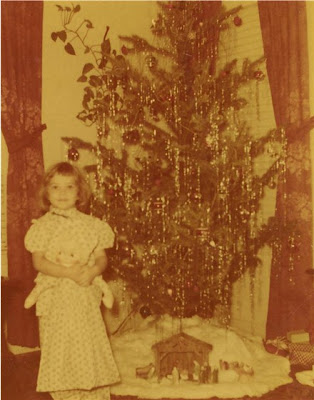 The tree is a pretty typical '50s version, too – large multi-colored lights (trust me on that), and lots of tinsel. The ivy that appears to be growing out of it was actually growing in a wall planter behind the tree. My mother always had lots of ivy growing everywhere – I even have a pot of it that I inherited from her, and it's thriving in my living room right now.

Wish I could say that I inherited all the ornaments on the tree, too – I remember there was a little glass snowman and a Santa Claus that I especially coveted. But all my mother's ornaments were broken or lost in a move from San Antonio to Fort Worth, years ago. And the creche was lost or broken or given away years before that. I used to love arranging it and moving the figures around every year. I had a parakeet and a toy fox terrier who also loved playing with it – and in it. So, actually, I guess it's no surprise it didn't make it past my childhood.
Posted by jlshall at 6:38 AM