Dreaming of a Pink Christmas 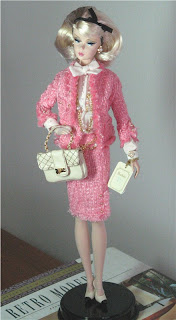 It's been a few years since I got a doll for Christmas. I've collected dolls for many years now, but lately I really haven't been actively collecting. Even so, I do like to add a new girl occasionally. And this year, one of the new Silkstone Barbies caught my eye. Called "Preferably Pink," and designed by Robert Best, she actually arrived a little early for Christmas, back in November.

And very pink, too. Now I don’t dislike the color pink, but I'm not really a huge fan, either. Probably the result of all those pink party dresses my mother made me wear, before I got old enough to fight back. However, when I was color typed back in the '80s (remember that?), pink and yellow turned out to be my "best colors." So maybe mother knew best, after all. 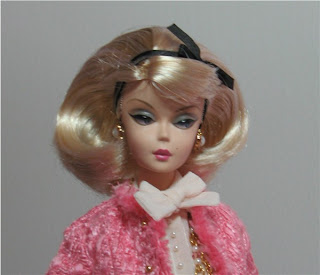 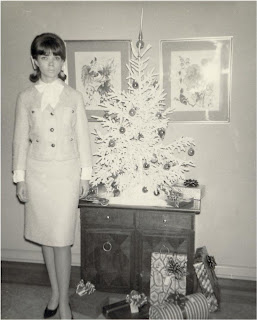 But in spite of all that pink, I was attracted to this particular doll mainly because of the outfit she's wearing. Her Chanel design suit reminds me so much of a similar suit I had as a teen. It was my Christmas outfit in 196--. Well, let's just say one year when I was a very young Boomer and the world was a younger and pinker place. Here's a shot of me in the outfit. You'll just have to trust me when I say it was pink, too – although a much lighter pink than Barbie's. Don't look like I'm very happy about having my picture taken, do I?

The ornaments on the tree were pink, too, as I recall. And the tree was white ("flocked"), and I think it belonged to my aunt. One of my other aunts had a silver aluminum tree that year. Well, as a family, we were nothing if not thoroughly modern.
Posted by jlshall at 10:44 PM